🔥 is fog hill of the five elements good ❓ 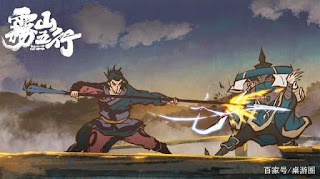 The plot and design are beyond the production level of Chinese animation in general . Watching the opening of the first episode, it is easy to think of excellent national style martial arts games like "Xuanyuan Sword of the Sky". Many details of the animated character modeling are based on Peking Opera's facial makeup. The double-edge, spear, slingshot, swords and other Chinese weapons have appeared in the scene and the use of weapons has also been adjusted to a clear and never cheated level. The charm and heritage of Chinese martial arts style are there and there is no need to worry about the cultural production.

The fog hill of the five elements can break through for its majestic fantasy and "realistic" Chinese style fantasy worldview. The coexistence of humans, monsters and celestial heroes is nothing new. But the monsters here are not absolute villains and the humans are not pure and good, it explores the complex human nature in the world of martial arts for adults.

Conclusion the fog hill of the five elements

If you like action , this donghua of martial arts , magic and fantasy you must see it and not only that it has a great animation , if we had to give any negative aspect would be the plot as it has not yet been fully developed .

➔🟢 How many episodes does the fog hill of the five elements have ?