There’s one question that is being frequently asked: “What does FLCL anime stand for? FLCL stands for Fooly Cooly. This OVA came out in 2000 and was created by Kazuya Tsurumaki. It was written by Yoji Enokido and produced by a bunch of production companies, including Gainax, Production I.G, and King Records. FLCL anime consisted of a total of 6 episodes that aired from April 2000 to March 2001. FLCL Progressive was the second season that started airing from June 3, 2018 and the third season, FLCL Alternative premiered on September 8, 2018. Both the seasons had 12 episodes in total.

FLCL tells us a story of a 12-year-old boy named Naota Nandaba who lived with his father and grandfather in the city of Mabase. One day, Naoto gets hit by a Vespa and the one who was riding that Vespa was Haruko Haruhara. Haruko gives unconscious Naoto CPR in order to save him and succeeds in this task. She hits Naota with her electric bass guitar and decides to follow him when he’s leaving.

Haruko ends up working as a maid in Naota’s house. Naota realizes that back then when Haruko hit his head, it created an “N.O” portal. It was revealed that some giant robots were coming out of that portal. Those robots were made by the Medical Mechanica Company.

Haruko is able to tame a robot by hitting it on its head. She named it Canti and it became a friendly robot. Now, Naota is able to operate Canto by letting it ingest him and fight off other robots.

Haruko reveals to Naota that she works as an alien investigator and is from the Galactic Space Police Brotherhood. She also tells Naoto that she’s looking for a space-manipulating being called Atomsk. Whenever Naoto operates Canti, Atomsk is brought to Earth. Now, the Medical Mechanica Company has held Atomsk in their custody. The company is also targeting Naota and Canti. They’re able to absorb Naota in their doomsday before he gets absorbed in Atomsk. There is a battle between Atomsk and the company that ends with the company’s defeat. The Earth is free from all threats and there is peace everywhere. 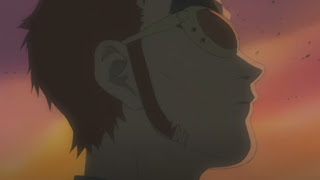 FLCL Progressive opens years after Haruka’s first visit to Mabase. She’s back and now she’s acting as a middle school teacher. This time, her target is a 14-year-old girl named Hidomi Hibajiri and she uses Ko Ido for that. Haruka has a clone of herself, Julia Jinyu,  that split from her as she was trying to control Atomsk’s power. Haruko absorbs Julia in order to restore herself. There’s a conflict between the Medical Mechanica Company and Interstellar Immigration Bureau yet again. This time when Atomsk appears on Earth, Haruka ends up failing again because of Julia getting separated from her and leaving.

FLCL Alternative introduces us to Kana Koumoto and her friends. They live in a small town in Japan and everyday is the same for them. Kana is just your average girly girl who loves to go shopping with her friends and hangout with them in school. But to her, it feels like nothing special is ever going to happen in her life.

Kana and her friends decide to make a bottle rocket to break the monotony. As soon as they are done making the rocket, a robot crashes into it and destroys it. They come across Haruka who tells them about her being a Galactic Investigator. After meeting Haruka, Kana’s life becomes more exciting and takes an interesting turn.

There has been a lot of debate on whether FLCL anime follows the same events that happen in the manga. The answer is: No. Surprisingly, the manga came out after the anime was released. Even though both anime and manga are super short, with manga running for only two volumes, both of them are quite different from each other. The plot of both FLCL anime and FLCL manga is similar but some events that happened in them are different. For example, in the anime, we come across some secret service guys. They are nowhere to be seen in the manga. The super intense fights with the robots are also not present in the manga. Another example is of Haruko fighting against a robot with a slingshot. It is also present in only the anime. The manga provides us with a better and well paced story that does not involve any kind of unnecessary events. It’s even easier to follow and understand than the anime.

FLCL anime is funny, weird and crazy. These three words summarize this anime perfectly. It’s going to make you think and also make you come to your own conclusion. It’s undoubtedly one of the ebay Sci-Fi anime out there because of its solid plot and breathtaking visuals. The creators have done a great job making such a unique story that appeals to masses. If you’re someone who’s into Sci-Fi and wants to watch something short and fun, then FLCL is something that is definitely going to make you fall in love with it!