BL , also known as Boys-Love, has been a topic of controversy for a lot of fans. However, some fans absolutely love the concept and have indulged themselves in the series involving this concept. Chinese Anime has been bringing forth the concept of BL quite a lot and we are totally up for it. Today, we shall be talking about Top Donghua that involve the concept of BL. So, if you’re interested in the Best BL Chinese Anime Series then read on! 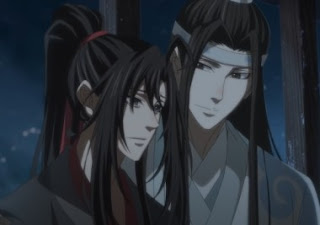 Antidote is known to be quite a Famous Chinese Anime because of its unique way of portraying the whole BL concept. The story involves two boys. One of them is a rich boy who ran away from his home and the other one is a gangster. Both of them cross each other and a fight starts between them. That’s when the sparks fly and they fall in love with each other. They’re involved with each other to the point that they call each other their antidotes. Antidote is such a heartwarming and sweet story. If you want to watch one of the Best BL Chinese Anime Series then you need to check this out.

Spiritpact is one of the supernatural chinese anime that involves the concept of BL beautifully. It is highly emotional and also involves a lot of cute moments. The story involves You Keika who belongs to a family of exorcists. Now that his parents are dead, he’s struggling financially. He ends up becoming a street fortune teller as well as a computer technician. One day, he comes accross another exorcist who is fighting an evil spirit. Unfortunately, he gets hit by a car, dies and becomes a ghost. That’s when the other exorcist asks him to form a pact with him. You Keika becomes the spirit shadow of the exorcist and both of them fight evil spirits together. Spirit Pact is definitely one of the Best Fantasy Donghua.

We are given an abundance of Chinese Historical Anime and they cover most parts of the Chinese Donghua. Mo Dao Zhu Shi is one such historical Chinese anime that tells us the story of Wen Wuxian who is feared by everyone as he defeats the tyrannical Wen Clan. Thirteen years after he died, he woke up in the body of Mo Xuanyu who was previously rejected by everyone and summoned Wen Wuxian just so he could avenge him. Lan Wangji is the cultivator from his past that he meets soon. Now, they will work together in order to reveal the mystery behind the tragic death of Wen Wuxian. Mo Dao Zhu Shi is no doubtedly the Best Action Donghua of all time!

We have listed some of the Top Donghua that involve the concept of BL. If you’re into something like that then you should check out our recommendations. We shall definitely come back with more!