Over The Sky , also known as Kimi wa Kanata , is an anime movie written as well as directed by Yoshinobu Sena. It came out on November 27, 2020. This anime movie is produced by Digital Network Animation. Today, we’ll be doing Over The Sky anime movie review. We’ll be talking about its story, characters, music and animation. So, without further ado, let’s get right into it!

Over The Sky Anime Story

Kimi wa Kanata anime movie tells the story of Mio and Shin who are childhood friends. They live in the Ikebukuro district. Mio is secretly in love with Shin and spends most of her time thinking about him. However, she can’t find the courage to confess to him. One day, Shin and Mio fight over something very small. Mio decides to make up with him after the fight and heads towards his place, getting drenched in the rain. On her way, she gets into an accident and becomes unconscious. When she wakes up, she finds herself in a strange world that she is not familiar with.

One problem with Over The Sky anime film is that it leaves a lot of things unexplained. It also has too many plot holes that makes you lose interest very quickly. It would’ve been a perfect anime movie if these issues were fixed. On the brighter side, there are a lot of metaphorical uses in Over the Sky anime movie that makes it very enticing. The concept of this anime movie is also very unique and interesting. Overall, the plot is definitely not perfect. There are a lot of issues with it that make it seem a little flat and boring. 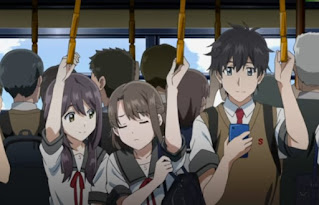 Over The Sky Anime Characters

Mio and Shin are two typical main characters that could be found in any other romance anime. They’re quite likeable alongwith the other supporting characters. All the characters were actually really well-written and gave us an enjoyable experience.

Over The Sky Animation

Trailer Anime Over The Sky

Over The Sky Anime Music

There is something special about the soundtrack of Over The Sky anime movie. It makes us feel a lot of things. It’s soothing, pleasing and sentimental . It’s also very catchy and will make you hum it after watching the anime movie.

Where Can I Watch Over The Sky Anime Movie ?

You can watch both subbed and dubbed versions of Over The Sky Anime Movie on Crunchyroll’s official website.

It won’t be wrong if we say that the Kimi Wa Kanata anime movie is a strange one but that does not make it less enjoyable. There are some moments that actually make you think about some things. It’s also a beautiful littles story about romance. So, if you’re interested in such kinds of anime movies, you should totally check it out.