The first season has long since ended and the second season would start on the same date as the first but what was not expected was the news that it was scheduled. It's a big surprise for manhua fans and Tunshi Xingkong season 2 returns as an "annual series", which means it will continue to be updated every Wednesday from 29 December and will run for at least a year. 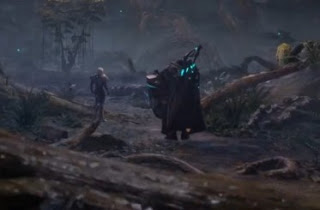 The Chinese anime apocalyptic scenes and battle scenes show a strong science fiction style. The original donghua novel is still an oriental sci-fi story setting, so in addition to the modern technology that fills the screen, there are Chinese elements everywhere. At the beginning of the setting trailer, there is a building similar to the Chinese National Pavilion at the World Expo and there are also technological objects wrapped in ancient Chinese architectural elements, the perfect combination of future technology and ancient Chinese culture, which looks very friendly.

( Video uploaded by a random Internet user , if you want to see the original go to the official account )
Synopsis : One day, an unexplained RR virus appears on Earth, plunging the world into disaster. The infected animals mutated into horrible monsters and invaded the world, while the human race faced destruction by building walls and establishing a base city as the last bastion of humanity. This period of human suffering is known as the "Great Nirvana". In the extreme conditions of survival, mankind's physical capabilities gradually developed and the culture of martial arts was promoted. The best were called "martial artists".