The voice actress who plays the protagonist Dora in Zuihou de Zhaohuan Shi Chinese online anime confirmed that the Chinese animation would not be released until 2022 on Bilibili, although the Chinese cinemas release remains unchanged and will arrive in November 2021. 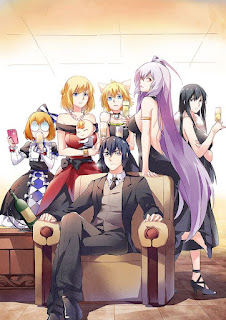 The voice actress of the main character Dora confirmed that the last summoner will be released in cinemas soon and also small changes have been made in the sypnosis. This was part of the message:


Zui Hou De Zhao Huan Shi , is a Chinese animation starring Dora, is coming soon, so come to the cinema to watch it (and enjoy the battle of this Dora ! wink~).

From November, we will be holding screenings of Summoner episodes in Beijing, Shanghai, Hangzhou, Chengdu, Guangzhou and Wuhan. 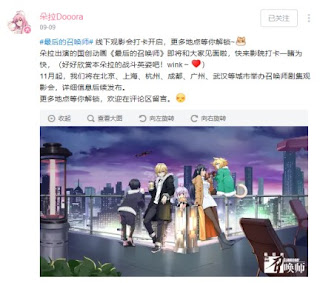 Synopsis : All things have spirits. Those who can summon the spirits of all things are called summoners. Summoning clay, summoning dry bones, summoning spirits, summoning stars... Since ancient times, the legend of the summoner has been hidden deep in every story but was eventually sealed by time and forgotten by the world. A new era, a young man awakens! Aspiring to become the king of ramen, A jie unwittingly summons the goddess Dora and thereafter enters the world of summoners. Along the way, he gathers strange and eccentric companions to fight against the mysterious "Destroyer" organisation. In the midst of battle and adventure, will the young people be able to control their own destiny and discover the truth of the world?

➔ ▷ 📺 does the Chinese platform bilibili have ads ?